Update: A new version of this for Blender 2.8 can be found here.

How to model this... 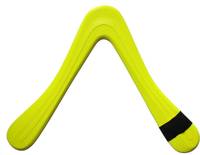 Recently, 3D printing has become so affordable that numerous companies offer 3D printed models at hobbyist prices. The obvious application for me was to create a printable boomerang model.

A while ago, I created a printable tri-blader using the trial version of a professional CAD tool. (A discussion of how to create boomerangs in CAD can be found in another article on this site.)

The boomerang worked reasonably well – I am too camera-shy to demonstrate it myself ;-), but luckily two people have printed that design and posted videos of the boomerang in flight on YouTube: video 1, video 2. Thanks guys!

So the boomerang worked, but I wanted to make one using open-source tools, which is why I tried Blender. While Blender is targeted at 3D visualization and animations, and not so much a CAD/CAM system, there are lots of powerful modeling tools in there. With Blender and some of the modeling techniques from William Vaughan's excellent book Digital Modeling, it's easy enough to create a workable boomerang shape for an actual, 3D-printed flying stick.

The boomerang shown above can be found on Thingiverse. I have had several prints of it made, ranging from 18 cm wingspan to about 30 cm. All of them are reasonably good fliers, even the small one which is almost pocket-sized. On one of the medium ones, I taped a small coin (1 Euro cent) to increase range and wind stability, which works really well.

Disclaimer 1: Note I'm by no means a professional engineer, nor have I ever worked professionally with CAD software, CNC tools, or some such. There are surely better ways to create 3D boomerang models, if you have the right tools and training. The model created here is ok, though, for playing with 3D modeling and printing.

Disclaimer 2: This is not a general Blender tutorial. There are plenty of those on the web. You might want to get acquainted a bit with Blender in general before trying to follow this tutorial.

We start off with the default cube. Note that the size of the cube is 2x2x2 units.

I scale the cube to 20 x 20 x 0.4 units. That's about the volume that I can use on the 3D printer if you assume that a unit is one centimeter.

This looks about right. You could rotate the cube and squeeze out a little more space for the boomerang. I don't worry about that now, and scale the boomerang to final dimensions later using the printer software.

Drawing the Outline of the Boomerang

I start off modeling the boomerang by adding a plane (Shift-A). At this point, I want to trace the outline of the boomerang with a number of four-sided polygons ("quads").

In edit mode (tab), I move the vertices (G) to follow the shape of the boomerang.

I extrude two vertices at a time (E). Afterwards, both can be scaled (S), moved (G) and rotated (R) at the same time or separately.

Notice where the shape needs more detail and where it doesn't. This may look a little rough right now, but we'll fine-tune the shape later.

I walk around the whole boomerang, trying to keep the topology approximately symmetric.

To be able to create a leading and trailing edge later, I add two loop cuts (Ctrl-R). In order for this to work, our topology needs to be a chain of quads that runs consecutively from one end of the boomerang to the other.

Before we can create the airfoils, we need to change the topology near the wing tips. We want the leading and trailing edges to flow around the whole boomerang, somewhat like a tapeworm.

We need some more topology here, so I create another loop cut (Ctrl-R).

The idea is to merge the corner vertex with its left and right neighbors.

To do that, hit alt-M and "Merge at first" or "Merge at last", depending on where the resulting vertex should be.

The finished wing tip, ready to have airfoils added.

Here's the difference between the repaired wingtip (dingle) and the original one (lead). We want the lead to look like the dingle.

After repeating the topology repair on the lead wingtip, we can see our airfoils.

We now need to move around the leading and trailing edges a bit. With two vertices selected, I can use "Vertex Path" from the "Select" menu to select the path in between.

Here's our leading edge. We can now move it to the front of the wing using "Edge Slide" from the edge menu (Ctrl-E).

In the same fashion, the other leading edge and the two trailing edges were created. The vertices near the elbow and the wingtips may need to be dragged around manually (G).

The flat boomerang ready to be extruded in the third dimension.

With all vertices selected, the shape can be extruded 0.4 units (4 millimeters) in the Z direction (Z). Constrain the extrusion to that direction.

We can now select a vertex loop around the edges (Shift-alt right mouse button).

The vertex loop gets moved along the -Z axis, say 3 millimeters (0.3 Blender units).

From a different perspective, the airfoil can be seen.

So far, the boomerang looks quite rough. This can be fixed by using a subdivision surface modifier. It's in the menu with the little spanner on the right.

The airfoil is not too bad, but I like to make it a little more defined.

To keep the subsurf modifier from rounding the top too much, another edge loop is created (Ctrl-R). This keeps the top from being rounded over.

That's our finished boomerang! Note that the modifier is just applied on the fly, the original geometry is still intact. This means vertices can still be moved around to fix the shape, and the resulting geometry will be smoothed again by the modifier.

Put on some baltic birch texture, and verify that this actually looks like a boomerang.

Place three copies of the wing around the 3D cursor. It helps to center it first (Shift-C). Then duplicate (Shift-D) and rotate by 120 degrees (R 120). The copies need to be joined (Ctrl-J) into one object.

Connecting the leading and trailing edge is easy. Just go to edge select mode, select opposite edges, and fill with faces (F).

To fill the middle, select the vertices of the inner triangle, extrude them (E) and merge at center (alt-M).

We could probably get away with this, but in general, it is advisable to avoid triangular faces. In order to repair these, add some loop cuts (Ctrl-R). This yields even more triangles, which we'll fix next.

We can now pick pairs of triangles and join them into diamonds (alt-J). Now we should be back to a topology that consists only of quads.

The rest works as in the two-blader case: extrude, define the airfoil, put on a subsurf modifier. This leaves us with a nice polygon flow, without nasty surprises in the airfoils around the center of the boomerang.